Cataract, also known as lens opacity, is one of the most common eye diseases among people over 55, when they see objects as blurred, as if through a veil.

The crystalline lens of the eye is a natural lens that transmits and refracts light. The lens is located inside the eyeball between the iris and the vitreous body. Normally, the human lens is transparent. For various reasons, cataract causes partial or complete opacity of the lens, it loses its transparency and only a small portion of the light rays gets into the eye, therefore, the vision decreases and the person sees dimly and smudgy. Cataracts usually develop in adulthood, but can also occur for other reasons.

Cataracts can be congenital, traumatic, radiation, and age-related. But age-related cataracts are the most common. No one is immune to this condition. Almost everyone over 80 years of age has it to a greater or lesser degree.

Congenital cataract accounts for more than half of all congenital defects of the visual organ. It may be caused by metabolic disorders, maternal diabetes mellitus, and infectious diseases of the mother in the first trimester of pregnancy. The key is early diagnosis of congenital cataracts. If the localization and the opacity of the crystalline lens do not interfere with the proper vision, such cataract does not require surgical treatment. If the opacity interferes with the light rays to the retina and the central vision, this obstacle must be removed as early as possible to allow the child’s visual system to develop properly. Such interventions are performed even on the youngest children, starting at three months of age.

The first signs of a cataract are:

How does vision deteriorate with age-related cataracts?

Optical protection mechanism of the retina

Why don’t glasses help with cataracts?

Unlike myopia, hyperopia, or astigmatism, which can be corrected with spectacles, this type of correction cannot help with cataracts. Optical correction is designed to change the refracting power of the eye so that the rays hit the retina precisely. The mechanism of visual impairment in cataracts is different: clouding of the crystalline lens prevents the rays from reaching the retina. Consequently, the problem can only be solved by removing the obstacle – the lens that has lost its transparency.

People often mix up cataracts with other eye diseases, such as age-related farsightedness. Only an ophthalmologist can make the correct diagnosis. Modern diagnostic equipment allows detecting cataracts even at an early stage. Based on the medical findings, the doctor makes a prognosis for the disease or prescribes cataract treatment. 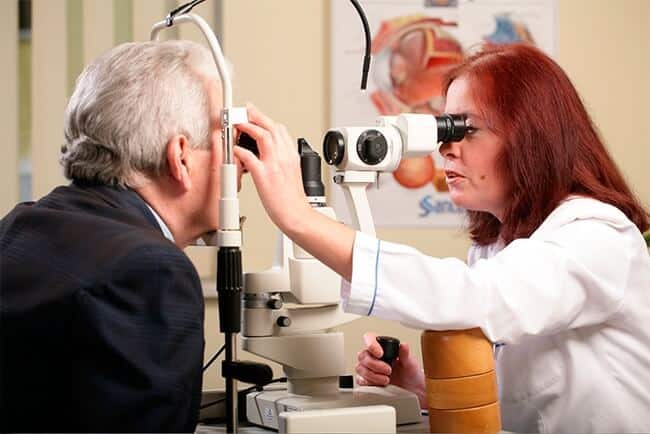 A cataract is an irreversible process. If left untreated, cataract leads to vision loss and, consequently, the inability to live a normal life. Even in its initial stages, the condition may hinder normal vision and cause discomfort. When the lens becomes opaque, it thickens. Correspondingly, changes occur in the entire visual system, since the internal structures of the eye are under increased strain. When a cataract is neglected, the lens not only becomes cloudy but also grows in size, which leads to an increase in intraocular pressure. If the clouded lens is not extracted, there is a risk of developing a dangerous complication known as secondary glaucoma. Glaucoma imposes an increased load on the optic nerve and other eye structures, impairs blood circulation in the eye, which leads to loss of signals to the cerebral cortex, impairs vision, and disturbs peripheral vision. Visual characteristics lost in glaucoma cannot be restored.

Ways to deal with cataract

The only way to get rid of a cataract for good and get your vision back is surgery, which replaces the cloudy natural lens with an artificial, high-tech intraocular lens. Vision returns immediately after surgery and is permanently stabilized within a week. There are no restrictions on physical activity after this cataract treatment.

When should I have cataract surgery?

Cataracts should be extracted as soon as they interfere with normal vision. The surgery does not depend on the stage of the disease. There is no need to wait for it to mature. There is no age limit for cataract treatment.

Many people believe that cataract drops can help and even consider them as an alternative to surgery. In the initial stages, drops can (though not always) only slightly slow down the cataract progression. However, this method of cataract treatment cannot stop the clouding of the crystalline lens and even less so restore its transparency. Therefore, by relying on drops and postponing surgery, a person wastes precious time and has to put up with the deteriorating vision. If too much time passes, there is a risk of irreversible vision loss.

A cataract is often combined with another dangerous eye disease called glaucoma (elevated intraocular pressure). Sometimes it is quite enough to remove the enlarged crystalline lens due to mature cataracts to normalize the pressure. In other cases, a simultaneous surgery for cataract and glaucoma is performed involving ultrasound phacoemulsification with the artificial intraocular lens implantation and non-penetrating deep sclerectomy.

According to 2014 statistics, 70% of people in Ukraine over 75 have cataracts. Among those over 80, this number reaches 95%. According to data from 2000, cataracts were diagnosed in 57% of the population at age 75 and in 85% of those over 80. In addition, the incidence of cataracts at the age of 50 to 60 is increasing. Does this indicate that a larger proportion of people are developing cataracts? It’s not really true. Diagnostics of cataracts have reached a qualitatively new level, and cataracts are being detected at earlier stages more often. People’s awareness has also increased. They started visiting an ophthalmologist more often without waiting for serious problems with their eyesight.

Cataracts are often combined with age-related farsightedness. The mechanisms of these two diseases are different from each other, although they have similar causes – age-related changes. When a cataract affects the lens, it becomes cloudy and prevents the light from reaching the retina. In presbyopia, the decrease in vision is caused by a weakening of the muscles that hold the crystalline lens in place, loss of elasticity, and as a result, loss of accommodation. After cataract surgery, a person with age-related farsightedness still requires reading glasses. This problem is resolved by the modern artificial crystalline lens (intraocular lens with special optical characteristics), multifocal or pseudo accommodating. They allow seeing objects at different distances, and the person who has recovered from a cataract does not need glasses for reading.

Secondary cataract means clouding and thickening of the posterior capsule of the lens, leading to visual impairment. Symptoms of secondary cataracts include a gradual decrease in vision, glare from the sun and artificial light sources, and fog in front of the eyes. A secondary cataract is successfully treated with a special laser. During treatment, the central optical zone is cleared of opacities, allowing for good visual performance.