Glaucoma is an eye disease characterized by a constant or intermittent increase in intraocular pressure.

A healthy eye maintains a certain pressure (18-22 mm Hg) at all times due to the fluid inflow and outflow balance. In glaucoma, the circulation of fluid is impaired. It accumulates, and the intraocular pressure begins to rise. The optic nerve and other structures of the eye experience an increased strain, and the blood supply to the eye is disrupted. As a result, the optic nerve atrophies, and visual signals no longer reach the brain. The person begins to see worse, the peripheral vision is disturbed, and as a result, the visibility area is restricted. Eventually, irreversible vision loss can occur.

According to statistics, glaucoma has been diagnosed in 205 thousand people in Ukraine. About 25 thousand new cases of glaucoma are diagnosed each year.

The causes of glaucoma

Depending on the state of the optic nerve disc and the degree of the visual field narrowing, there are four stages of glaucoma:

What age is susceptible to glaucoma?

Glaucoma may occur at any age, but it most often develops in elderly people.

Depending on when glaucoma develops, a distinction is made between:

Who is at risk?

The insidious part of glaucoma refers to the fact that it can be completely asymptomatic in its initial stages, while the visual function is lost in the meantime. The onset of the disease can rarely be detected, and the process slowly and imperceptibly progresses to a certain state.

How a person sees with glaucoma:

The first warning signs are visual discomfort represented by blurred vision immediately after sleep, upon opening the eyes, and the appearance of iridescent circles around light sources when looking at them. In the initial stages of glaucoma, these phenomena disappear within several minutes after sleep. This is caused by corneal edema due to blood stagnation during sleep. This, in turn, results from the increased intraocular pressure at night. If these sensations persist, you should immediately contact an ophthalmologist and undergo a complete diagnosis of the visual system.

The main threat of glaucoma means permanent vision loss if the disease is not detected and untreated in time. Visual characteristics lost due to glaucoma cannot be restored; you can only stop the disease’s progression.

What is an acute glaucoma episode?

An acute glaucoma episode results from a sudden and sharp increase in intraocular pressure. The main symptoms of an acute episode of primary glaucoma are a sharp pain in the eye with a headache (most often in the forehead and temple on the side of the affected eye) and may be accompanied by nausea, vomiting, discomfort in the heart, and bradycardia, and general weakness. In an acute glaucoma episode, it is vital to seek immediate medical attention. If qualified care is not provided in time, vision can be lost forever.

Timely diagnosis of glaucoma is the first step to preserving vision. An ophthalmologist can diagnose glaucoma after a complete examination of the entire visual system. Simply measuring the intraocular pressure is not enough to determine the onset of the disease. During complex diagnostics, the eye ground and optic nerve disc are examined with modern equipment, and the visual field is examined in detail. Only during such diagnostics, it is possible to detect the initial manifestations which precede the earliest changes in the visual field and to stop the process in time. Sometimes the intraocular pressure is elevated, but there are no other signs of glaucoma. This is common in various endocrine disorders and requires a comprehensive examination of the patient.

Open-angle glaucoma accounts for over 90% of the cases of this disease. In open-angle glaucoma, the natural drainage system of the eye is open, but its functions are impaired. The result is a gradual increase in intraocular pressure. As a rule, open-angle glaucoma is characterized by an asymptomatic, almost imperceptible course of the disease. Since the visual field gradually narrows, a person sometimes quite accidentally discovers that he/she can only see out of one eye. In some cases, there are complaints of periodic iridescent circles when looking at a light source and blurred vision.

In closed-angle glaucoma, intraocular fluid accumulates because there is no access to the eye’s natural drainage system. The iris overlaps the angle of the anterior chamber. As a result, pressure builds up, which can lead to an acute glaucoma episode.

Ways to deal with glaucoma

Glaucoma should never be neglected. Regular dynamic examination of the visual system and compliance with the doctor’s recommendations is the key to successful treatment because the fight against glaucoma is an active process not only for the doctor but for the patient as well. Eximer Ophthalmology Clinic performs effective surgical interventions to normalize the level of intraocular pressure. The individual treatment program is tailored to the type, stage, and concomitant diseases of glaucoma. It is worth remembering that timely treatment can save your eyesight. 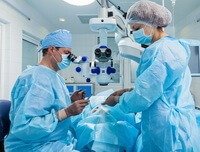 Any treatment for glaucoma is aimed at reducing intraocular pressure. Glaucoma treatment can be conservative (medication) and surgical (including laser procedure). Conservative treatment means the selection of special medications after a thorough diagnostic examination and is aimed at lowering the intraocular pressure. The choice of the drug takes into account all the peculiarities and its compatibility with other medications, as well as contraindications. But it is crucial to remember that the drops do not restore the fluid balance in the eye but only maintain it artificially.

Surgical glaucoma treatment is aimed at creating additional pathways for the intraocular fluid outflow without the medications. It allows restoring the natural fluid balance in the eye in the case of open-angle forms of glaucoma. In the case of closed-angle forms, both traditional surgeries and transparent lens extraction methods with intraocular lens implantation are applied (if the lens does not match the eye size). Eximer Ophthalmology Clinic employs the most advanced surgical techniques for glaucoma treatment such as NPDS (non-penetrating deep sclerectomy), laser trabeculoplasty, and laser iridectomy.

If glaucoma is complicated by cataracts (a clouding of the crystalline lens), both conditions require surgical treatment. However, it is not uncommon for cataracts to be the cause of secondary glaucoma. This happens in advanced cases of cataracts when the crystalline lens not only becomes cloudy but also increases in size, preventing the normal outflow of intraocular fluid. Sometimes it is quite enough to remove the enlarged crystalline lens due to a mature cataract to get the pressure normalized. In other cases, cataract and glaucoma surgeries are performed at the same time.