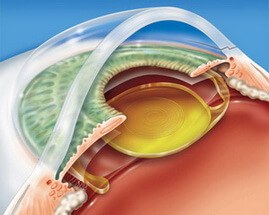 For example, during cataract surgery, when the natural lens loses its transparency, and during refractive lens exchange, when an intraocular lens allows treating myopia, hyperopia, and high astigmatism.

The intraocular lens placed inside the eye performs all the functions of the natural crystalline lens and provides the necessary visual characteristics.

Why can’t I do without an artificial lens?

The natural human lens is a natural lens that refracts light and forms an image on the retina. When the crystalline lens loses its function (e.g., due to cataracts, it becomes opaque and does not allow light beams to pass to the retina), it is replaced with an artificial intraocular lens (IOL). Patients often ask: Is it possible to do without the crystalline lens at all? The matter is that the natural lens has an optical power of about 19 diopters. If the crystalline lens is removed and not replaced with an artificial lens, the optical system of the eye cannot cope with such a “loss”. The light beams are not focused on the retina, and the vision will be blurred. Just imagine: to compensate for these diopters without an implanted IOL, you would need glasses that would be a few centimeters thick! Wearing such glasses would be simply impossible.

An intraocular lens consists of an optical element and a supporting element. Modern lenses feature these elements made of the same biocompatible material. The uniform design of the intraocular lens allows not only to reduce the micro-access for implantation to 1.8 mm but also to avoid the risk of complications during the surgery. The likelihood of rejecting such a lens is excluded. When a monoblock lens is implanted, the eye tissue is not injured, preserving its shape and integrity.

The materials used to manufacture intraocular lenses are biocompatible with eye tissues and do not cause allergies or inflammations. This ensures that the artificial lens is not rejected by the eye tissues and is as close to the natural lens as possible. Acrylic, hydrogel, silicone, and collagen lenses are currently the most commonly used.

Modern intraocular lenses are made of a flexible material. The flexibility of the lens makes it possible to implant the folded artificial lens into the eye through a micro-access of only 1.8 mm with a special injector. The lens unfolds automatically and is securely fixed inside the capsular bag. This technology allows avoiding sutures. The micro-access is self-sealing afterward, which means that the rehabilitation period is minimized and the risk of postoperative astigmatism is excluded.

As a rule, high-tech lenses are equipped with a so-called yellow filter. The natural human lens has special protective properties that prevent the retina from the negative effects of UV rays of a certain spectrum. As you age, the lens of the human eye turns yellow. This is a natural mechanism to protect the retina from the negative UV and blue rays (to prevent irreversible retinal damage). The yellow filter that the new generation lens possesses is similar to the natural ones, and the intraocular lens protects the retina in the same way as the natural lens. Ophthalmologists consider this property as a necessary standard.

There is a special diffraction zone on the optical surface of the intraocular lens, which provides a clear image. Each crystalline lens has the necessary optical characteristics to provide good vision. The optical power is calculated individually for each patient based on the peculiarities of his or her visual system and the purpose of the intervention. Lenses with complex optics allow correcting myopia, hyperopia, including age-related one, and astigmatism.

Intraocular aspherical lenses are specially designed to correct the spherical distortions (aberrations) often seen in people after the artificial lens implantation such as halos, reflections, flares, which mostly appear in the evening or at night. In most cases, the reason for their occurrence is a discrepancy in the optical system: the human eye or the intraocular lens. Aspherical lens models have an aspherical surface and the same optical power at all sections, so the light beams refracted through the lens are focused on one point instead of several points. The image is clear and distortion-free. Such characteristics of the lens allow obtaining a better image, which is especially important when working in low light conditions when the pupil is strongly dilated.

Every person over 40 undergoes a natural change of accommodation – the focusing ability of the eye to see clearly both close and distant objects. Over time, even with perfect vision, the crystalline lens hardens, becomes less flexible, loses the ability to change its curvature quickly, and this is why a person needs glasses to see at close distances. Later on (about 60-70 years of age), the accommodation capacity is completely lost and glasses are needed for both near and far work. The modern models of the multifocal (pseudo-accommodating) and accommodating lens allow seeing well both at close and far distances, thus performing the functions of the natural lens. Multifocal (pseudo-accommodating) lenses imitate the function of the natural crystalline lens by the special optical design (mixed diffraction-refraction character of the optics). Having more than one focus, multifocal lenses maximize visual acuity in both near and far vision.

Owing to their unique construction, the accommodating intraocular lenses “move” and “bend” in the same way as the natural crystalline lens, engaging the eye muscles. This property makes it possible to achieve excellent visual characteristics when looking both near and far, as well as at intermediate distances. This type of lens has properties similar to those of the natural crystalline lens.

Sometimes a person with other eye conditions (myopia, cataract) has astigmatism and in such cases, the implantation of conventional intraocular lenses is not sufficient for obtaining good vision. For such situations, toric lenses correcting astigmatism and solving several vision disorders at once have been developed. The unique properties of a toric lens allow reducing and often completely eliminating corneal astigmatism, thus significantly increasing the quality of vision.

How is an intraocular lens selected at Eximer Ophthalmology Clinic?

Eximer Ophthalmology Clinics selects an intraocular lens individually based on the results of a thorough diagnosis of the patient’s visual system. The unique IOL-master (Zeiss, Germany) optical coherence biometer is used to estimate the lens optical parameters before surgeries (cataract or refractive lens exchange). This kind of estimate is especially important when implanting high-tech lenses with complex optics (multifocal, pseudo-accommodating, toric) to obtain maximum visual characteristics. Many other parameters are also taken into account when choosing the right lens: the patient’s age, lifestyle, occupation, profession, vision quality requirements, etc. By implanting an artificial lens, the patient achieves a new quality of vision.

How long will an intraocular lens last?

The intraocular lens implanted inside the eye has no “shelf life” and does not need to be replaced. Thanks to the special design and supporting elements, the artificial lens is firmly fixed in the capsule, it doesn’t shift and thus provides the necessary visual characteristics for many years.

How did intraocular lenses come into being?

Physicians owe the emergence of artificial lenses to the British eye surgeon Harold Ridley. During the Second World War, while examining pilots with eye wounds, he noticed that plastic shards from the cockpit windows, even if they remained in the eye for a long time, did not cause inflammation.

This discovery contributed to the development of special material for artificial lenses (crystalline lens), which became widely used in ophthalmology. In November 1949, Ridley implanted the first artificial lens made of polymethyl methacrylate (PMMA), which was an exact copy of the human lens. Despite the flawed nature of Ridley’s lens, his idea was a true revolution in ophthalmology. In 1999, 94-year-old Harold Ridley was knighted in the British Empire by Queen Elizabeth. In the following decades, intraocular lenses evolved both in terms of materials and design, as well as optical characteristics. At first, “hard” intraocular lenses were used. They were rigid and non-flexible, so their implantation required a large surgical incision and subsequent suturing, which greatly extended the recovery period. Then flexible lenses appeared that could be implanted in a folded state through a smaller incision (now up to 1.8 mm). Most modern ophthalmology clinics prefer flexible intraocular lenses, which are made of flexible synthetic polymers. The design of artificial lenses has also improved. The lens consists of two elements, the optics and the supporting elements. Previously, the supporting elements were made of a different material than the optical part. The advanced model of intraocular lenses (Monoblock) has become a breakthrough in cataract surgery. The optics and the supporting elements are made of the same bioactive material, which minimizes the risk of reaction in the eye structures and the development of secondary cataracts. Further improvement of intraocular lenses was aimed at providing the patient with the maximum quality of vision. If the patient had myopia, hyperopia, and astigmatism before the cataract onset, the implantation of an intraocular lens with the necessary optical characteristics would solve these problems in a single procedure. Eximer Ophthalmology Clinic has been always looking forward to offering its patients the most advanced techniques in the field of intraocular lenses used in the world’s leading clinics. Eximer Ophthalmology Clinic employs high-tech and internationally proven lenses from the world’s best manufacturers!