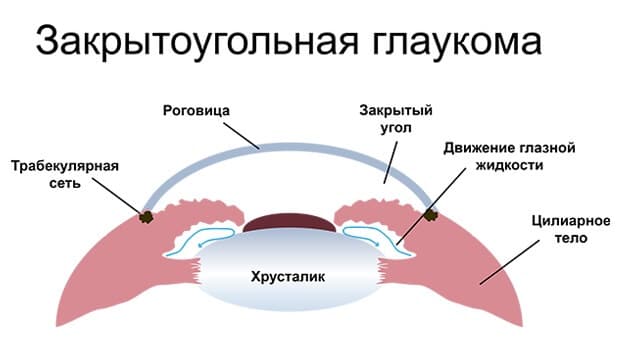 In Ukraine, glaucoma remains the leader among conditions that lead to visual impairment. Closed-angle glaucoma is less common among this pathology, but it occurs at an earlier age, from 30-35 years old.

To figure out what closed-angle glaucoma is, it is enough to have an idea of the anatomical nuances of the eye structure. It produces a special fluid that feeds the internal structures. Through a drainage system in the anterior eye angle, this fluid drains to the scleral veins. Microcirculation and outflow can be impaired if the anterior eye angle is blocked by the structures of the visual organ — the lens and the iris.

Fluid accumulates, provoking high intraocular pressure (IOP) being the main sign of glaucoma, including closed-angle glaucoma. In the first stages of the pathological process, it does not make itself felt, so it is crucial to determine it in advance at a doctor’s appointment.

Eximer Ophthalmology Clinic performs early diagnosis of closed-angle glaucoma with innovative and professional equipment, as well as selects an individual treatment plan for each particular case.

The main cause of the disease is overlapping of the angle of the eye chamber, caused by anatomical features. It is an individual structure of the visual organs that leads to the disease. The large crystalline lens, thickened iris, small chamber, and shortened eyeball.

Other factors affect the disease progression as well. If closed-angle glaucoma occurs, the causes may be as follows:

The condition may remain unnoticed for a long time, evolving into a chronic disease, or it can manifest itself in an acute attack.

If closed-angle glaucoma is suspected, the symptoms of the chronic process may be as follows:

An acute attack leads to irreversible vision loss; thus, it is extremely dangerous. Within several hours, the IOP exceeds 40 mm Hg (the normal value is 18-22 mm Hg). In this case, you should immediately seek medical attention and reduce the IOP.

Types and features of closed-angle glaucoma

There are three types of this condition.

The primary form of the disease occurs as an independent process. Three degrees of pathology are distinguished concerning IOP values according to Maklakov:

Closed-angle glaucoma 1A means that the process is just developing and the intraocular pressure can still be controlled. If diagnosed at this stage, the condition can be treated with a favorable prognosis.

Secondary glaucoma is a condition that develops with other processes:

As mentioned above, in an acute attack, IOP increases sharply, which is manifested by:

An acute attack can be confused with other pathologies. If such symptoms occur, it is vital to call an ambulance immediately.

To diagnose glaucoma, the hydrodynamics of the eye and visual function are studied in detail by special methods. Eximer Ophthalmology Clinic employs state-of-the-art equipment to examine the eye ground and other structures of the eye as accurately as possible.

If closed-angle glaucoma is suspected, the clinic’s diagnostics follows the recommendations of the International Council of Ophthalmology:

The treatment is determined by the cause of angle closure and the individual risks for a particular patient. According to international guidelines for the treatment of closed-angle glaucoma, therapy may also depend on the stage of the disease.

Medications cannot restore the full fluid balance inside the eye. They can only maintain it. Medications can reduce the fluid production and improve fluid outflow. Drug treatment requires regular check-ups and visits to an ophthalmologist.

Laser treatment is considered to be an attenuated, effective, and modern method. As for Ukraine, this treatment is performed at Eximer Ophthalmology Clinic in Kyiv.

Surgical treatment of glaucoma is one of the most demanded methods. At Eximer Ophthalmology Clinic, only the leading modern solutions in ophthalmic surgery are used:

If closed-angle glaucoma is diagnosed, contraindications to surgery are as follows:

Several tests must be performed before the intervention, and in the case of diabetes mellitus, a consultation with an endocrinologist is a must.

When a patient is diagnosed with closed-angle glaucoma, he/she should reconsider his/her lifestyle and habits. This condition can be controlled with medications at the doctor’s discretion. At the same time, some measures assist in halting the progression.

Restrictions and activities to avoid:

To detect glaucoma in time, it is recommended to visit an ophthalmologist once a year, or once every 6 months if there have been cases in your family. Do not take any medication without a doctor’s prescription, never self-diagnose and self-treat!