Wave Scan aberrometric analysis system is a unique diagnostic device that allows determining all optical distortions (aberrations) of both lower (myopia, hyperopia, and astigmatism) and higher orders (coma, distortion, spherical aberrations) in the visual system. The presence or absence of these aberrations determines the qualitative characteristics of a patient’s vision. 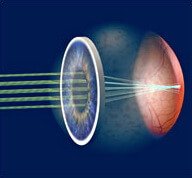 In a perfect visual system, light waves are not distorted and converge on the retina at a single point as they pass in parallel through the optical system. The aberrant visual system distorts the light beams. This process is the basis for aberrometric analysis of the human visual system. During aberrometry, a light beam of a certain wavelength is directed into the eye, it passes through the cornea, lens, and vitreous body, hits the retina, and reflects back. The aberrometer compares the outgoing and reflected wavefronts and then determines their difference (error). In fact, this difference (error) describes all the aberrations of the human eye.

One of the principles, outgoing refraction aberrometry, was first described in 1900 by Johann Hartmann, later modified in 1971 by Ronald Schuck, and used in astronomy to compensate for aberrations in telescopes as they pass through the atmosphere and outer space. The idea of using wavefront technology belongs to J. Bill (1982). In 1988-1994, the technology of using aberrometric analysis for vision diagnostics was developed. Later, an algorithm for wavefront reconstruction was developed.

The Wave Scan system scans the eye to obtain an aberration pattern of the human eye. Wave Scan converts wave distortions into an individualized map of the patient’s visual system (Acuity Map). The uniqueness of the Acuity Map lies in its ability to go beyond just registering one aspect of the eye refraction and the front surface of the cornea (which is usually done by autorefractometers), and accurately represent changes in the refractive state of the whole optical system (including parameters of the cornea, lens, vitreous body, tear film state, and all chambers of the eye) based on wavefront distortion measurements. The Acuity Map allows showing aberrations throughout the cornea in color.

The Wave Scan Aberrometer is operated jointly with the VISX Star S4 IR laser complex that performs laser vision correction with Custom Vue personalized support. The result of the analysis of incoming and reflected wavefronts (passed through all media of the eye, reflected by the retina, and passed back through all media of the eye) are recalculated. A special program then simulates such a corneal anterior shape that would completely compensate for the measured wavefront errors (aberrations). This individual program is written on the patient’s personal card, a special disk. During the laser correction, the disk is placed in the laser complex, which reads the information from the disk and performs the correction based on the received data, forming a compensating corneal surface, which could provide optimum vision with minimal aberrations (distortions). The VISX Star 4S laser correction with Custom Vue personalized support is characterized by high precision, stable results, and maximum safety.

The optical head projects a beam of light rays onto the retina. The rays are reflected from the retina and enter the wave device with touch sensors Hartman-Shack (Hartmann-Shack). The reflected beam is displayed by a matrix of elementary lenses on a video camera. Each lens of the array collects light information about the deviation of different areas of the pupil to form an image of the light passing through these areas. An array of points is formed on the sensor. The device compares the positions of the array of points collected by the sensor with a theoretical ideal (an ideal plane wave). For ideal direct waves, each focal point coincides with the optical axis of the lens, and the resulting light spots are equidistant from each other. For curved waves, the focal points shift in proportion to the local gradient of the wave, resulting in an asymmetrical arrangement of light spots. The WaveScan system reproduces these focal points as Hartmann-Shack probe patterns.

During aberrometric analysis, the WaveScan system converts wave measurements into an AcuityMap, an objective color representation of visual acuity variations across the entire pupil surface. Visual acuity maps can be generated to show all spherical, cylindrical and wave errors; only high-order aberrations; or corrected by WaveScan visual acuity using adaptive optics.

What can affect the wave analysis?