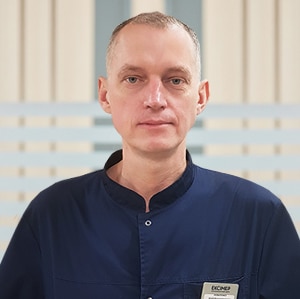 MD, PhD, ophthalmologist of the highest category,
laser surgeon, retinologist
Member of the Society of Ophthalmologists of Ukraine

He graduated from the General Medicine Faculty of Kharkiv National Medical University in 1996.

In 1998 he completed an advanced course on “Fundamental aspects of laser medicine and laser biology” at the Research Institute of Laser Biology and Laser Medicine.

In 1998 he studied on specialization course “Laser medicine and fluorescein angiography” at the State Institution “Institute of Eye Diseases and Tissue Therapy named after V. Filatov”, Odesa

Since 2001 he has headed the Laser Methods of Eye Treatment Department at the Ophthalmological clinic named after. prof. L. Girshman, Kharkiv

From 2001 to 2004 he studied on a specialization course “Laser ophthalmosurgery and fluorescein angiography” at one of the Departments of the MNTK “Eye Microsurgery named after S. Fedoriv”

In 2006 he has recieved the degree of PhD of medical sciences and the highest category of attestation.

Since July 2022 he has been a ophthalmologist, retinologist at the Eximer Ophthalmology Clinic in Kyiv.

He is an ophthalmologist with 26 years of medical practice. For this time he  performed more than thirty thousand laser surgeries in such areas: diabetic retinopathy, peripheral retinal dystrophy, secondary cataract, primary and secondary glaucoma, retinal vein thrombosis, retinopathy of prematurity and others.

He regularly improves the level of professional skills, constantly participates in international scientific and practical conferences and seminars.